The cane which was meticulously harvested
by João Marianelli from Nicaragua,
in the vast fields of an hitherto unknown town,
arrived at Unica Pedra,
where the hero(ine) of our drama
inhabited the huge fermentation vats.
[know not the gender of the yeast
we work with, hence this palavra called hero(ine).]

Elsewhere, on a Thursday morning,
in the month of February,
when the day was not so warm,
in the meadowy city of Campinas,
Monsieur R did a simple experiment,
with Pedra-dois and sacarose,
with a boost of extrato levedura and peptone,
quietly and unequivocally,
in a laboratory called LEMeB.

The bio-reactor was mounted and well assembled,
with ultra pure N2 going in at 0.5 L per minute;
Every now and then,
the LEDs flashed the pH and temperature,
measured inside the stirred vessel;
And the chiller chugging along,
unable to keep the temperature at 6 deg C,
owing to the unbearable heat,
emitted by many a compressor,
in the narrow room, frequented by
Senoritas: D e C
and other non-living entities. 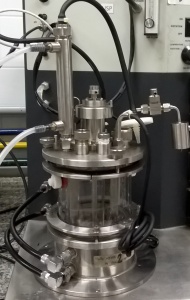 The reactor was inoculated with
some three million yeast cells per milli-Litre at 9:30 am sharp;
as leveduras pounced on 20 g/L of sacarose
with much delight, after all,
Marques et al, had recently published
an article in FEMS Yeast Research
titled ‘Sucrose and Saccharomyces cerevisiae:
A relationship most sweet‘.

Dottore, wondered how many hours
he must wait for the experiment to finish,
for there was not much data on sacarose
metabolism under anaerobic conditions.
using our only hero(ine) Pedra-dois.
The night was going to be long and
the dinner would have be at Bandejão,
with Mr. R’s colleagues D e J.

Abundant information was available
on glucose, from many a stalwart,
including V, B and G.
Hence, it was assumed that, in one hour,
0.3 grams of dry biomass is produced for every gram dry biomass present,
and one tenth of consumed sacarose
shall be rationed for biomass formation.

[Prof. H is thanked here for the unit I learned.]

As the growth was monitored using
a machine that detected scattered light,
it was guesstimated that an unit of absorbance
corresponded to half a gram of dry biomass per Litre.
Thanks to ‘Cell Biology by Numbers‘,
a book from Ron Milo, of Weismann Institute in Israel,
an ardent numberphile,and a devout physiologist,
that sometimes whisper I: ‘Je t’aime numéros‘.

~
With these information available,
the task is set,
and it is up to each one of us,
to set a time when the experiment
would finish.

Employing the hints provided below,
we shall conquer the mathematical arena,
using simple units and conversions, despite
our limited knowledge of microbial behaviour,
and attend (or must I say gatecrash) proudly the physiology
class of Dr. G the following year.
in Sala 31 at FEA, for mestrados and PhDs.

~
Best wishes everyone for yet another calculation,
who knows when we all may need it again.

Terms: Pedra dois is a yeast and the portuguese word for it is called levedura;  Palavra means word; Sala means room; Bandejão is the university canteen.

Hints:
1 yeast cell= 15 pico grams; 1 Abs ~ 0.5 g dry biomass/L
(1 Abs = 3 * 10 ^ 7 cells per ml; you can obtain this using the mass of a single yeast cell)
Calculate how much is 3 million cells per mL in terms of Abs unit; this is the initial absorbance
(You must have obtained 0.1 as initial absorbance and 50 mg/L as the initial biomass concentration)
How much is the maximum biomass correspond to Abs units?
(given that 1/10 of consumed sacarose goes to biomass; if all 20 g/L is consumed, we would get 2 g/L biomass which is 4 Absorbance units)
How much time would it take to reach this absorbance, considering that the experiment was commenced at 9:30 am and 0.3 g dry biomass is produced for every g drybiomass present per hour (also known as maximum specific growth rate)
(from 50 mg, you would get 65 mg (50 + 0.3*50) biomass; from 65 mg you would get 84.5 (65 + 0.3*65) biomass and so on; we have to do this until we hit 2000 mg; and you will see that it comes at 14 hours; i.e. around 11:30 pm the culture would reach the maximum biomass); a detailed video will be made soon.

In fact in Senhor R’s experiment, the maximum absorbance was reached at 10:15 pm, which differs from the calculation by an hour. Monsieur went home at 10:45 pm.